Strong growth and deteriorating performance are still the backdrop of a market that’s only recently started on a trajectory towards more onerous regulation.

The UAE Insurance Authority (IA) recently published its annual report capturing the key market stats for 2014. H.E. Eng. Sultan Bin Saeed Al Mansouri pointed out that the growing significance of the Insurance industry has created the need for the IA to devote more resources to the consolidation of the sector, thereby ensuring that it continuously advances while adhering to international best practices. Whilst the industry has shown growth over the past year overall performance of the sector as measured by Gross Loss Ratios has declined.

Written premiums have been steadily increasing over the last few years for both Life and General Insurance (GI). GI business continues to contribute roughly 3 quarters of the market GWP, a figure which has not changed much in the last 3 years. Life premiums do appear to be growing faster than GI premiums, dominated by the ever growing share of the Life market owned by Foreign insurers. Foreign insurers’ proportion has climbed from 65% of the Life market in 2009 to 82% in 2014. It is worth reminding ourselves that of the 23 insurance companies licensed to write Life business, 13 are national companies and 10 are foreign companies. Both in force and new business premiums were increasing until 2012, after which point, in force business has been on the decline. Over the period when they were increasing, in force business was the lion’s share of Life premiums but by the end of 2014, new business overtook in force business significantly. Potential inferences on deteriorating persistency may be valid here but, as with all industry reports, we cannot be sure.

With respect to GI, Medical insurance and Accident & Liability are unsurprisingly still the most significant contributors to total GI premiums still constituting 44% and 33% of total premiums respectively in 2014 as they both did in 2013. While there has been a steady increase in Medical premiums, Accident & Liability premiums have hovered around AED8 billion per year. One may assume that the recent implementation of compulsory health in Dubai may have been the primary driver of this growth however the fairly tepid takeup of the DHA compulsory product during most of 2014 suggests that this growth is likely due to premium rate increases passed by many insurers still incurring losses on this Line. Other GI Lines have increased marginally by 8% from 2013 to 2014 ending at AED5.6 billion in total. 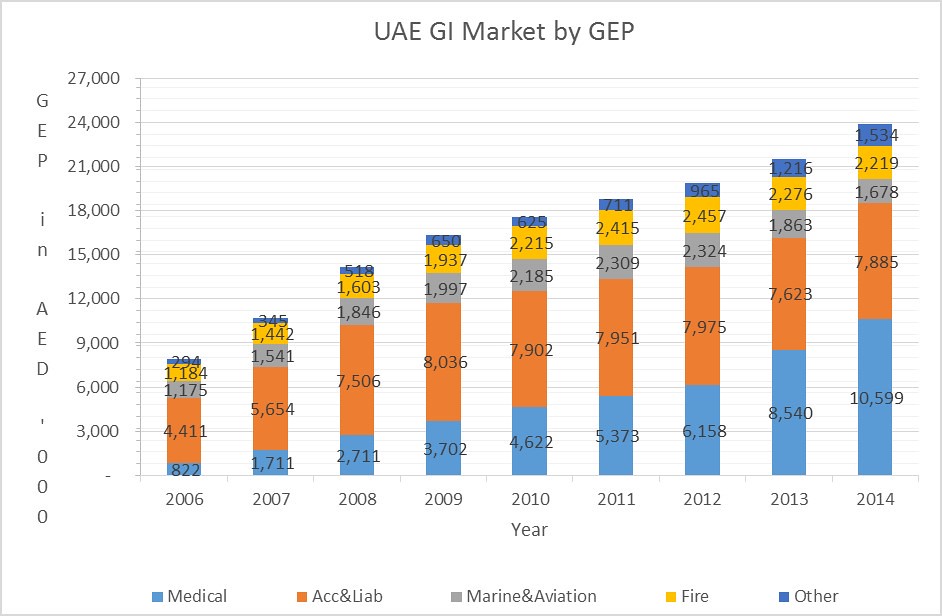 Takaful contributions make up a much smaller slice of the pie of total premiums as compared to Conventional premiums. Even though takaful contributions grew significantly from 2012 to 2013 (22%), they saw a drop from 2013 to 2014 of 8% while conventional companies experienced growth over both periods. While Medical insurance is becoming an increasingly significant line in the GI sector – as evidenced by the proportion of Medical to total GI Earned Premiums – both Motor TPL and Comprehensive lines display a declining trend in this sense. On average, the TPL GLR has been higher than that of Motor Comprehensive over the last few years. 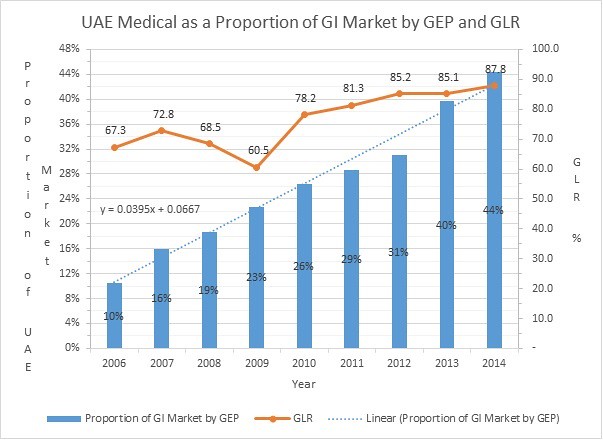 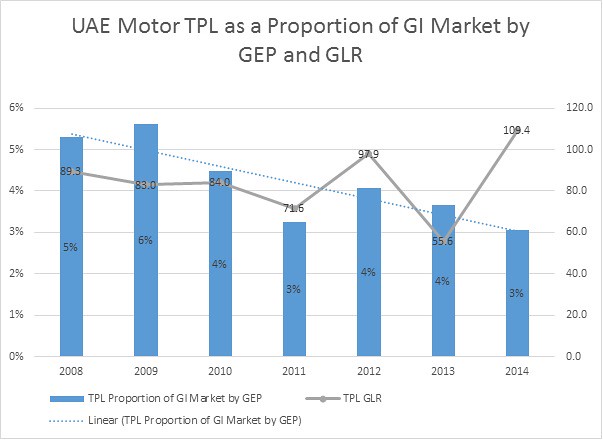 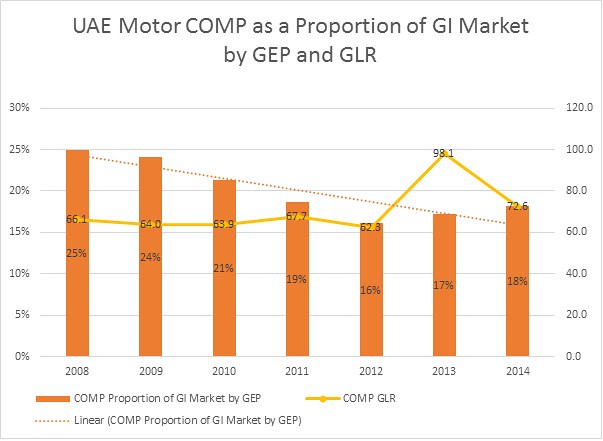 The retention ratios (net premium/gross premium) for GI Lines have remained quite steady at approximately 55% over the last few years which seems to imply that, in general, reinsurance arrangements have not changed significantly in this period. The retention ratios for Medical show a decreasing trend for 2014, an indication that risk appetites are decreasing in a generally loss making Line. 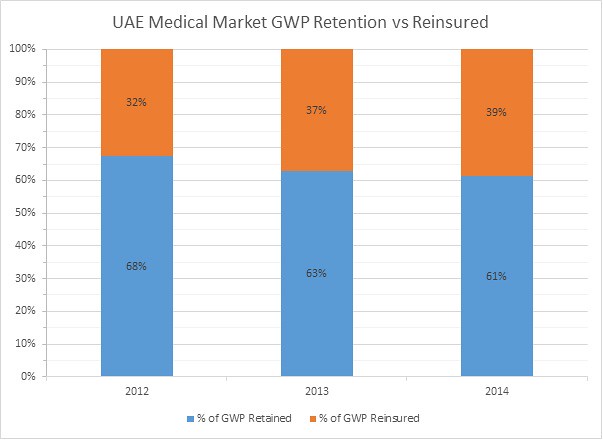 The total investments of the insurance sector have increased over the last three years. Insurance companies have invested heavily in shares & bonds with only a small portion of their portfolio invested in land & real estate, loans and deposits. Whilst investment in shares and bonds have risen, investment in the other asset classes have remained steady. 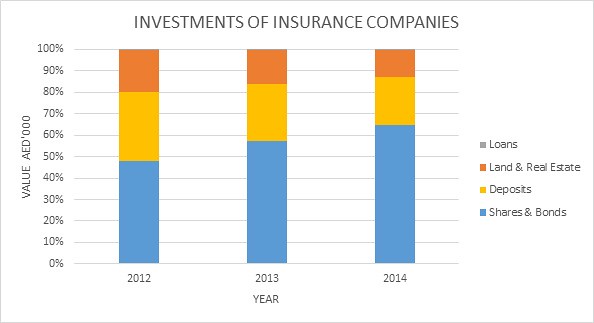 However, as per the recently issued Financial Regulations (FR) there are certain asset class limits to which insurance companies must now adhere e.g. insurers can invest a maximum of 30% of their portfolio in UAE equities and 20% in Non-UAE equities. Total equity investment as at 31 December 2014 stands at 64.7% of total investment which is greater than the maximum allowed asset class limit of 50% for equities. For the entire industry, asset class limits for land and real estate, loans and deposits do not exceed the maximum permissible limit.

The Financial Regulations of 2014 impose more stringent rules with deadlines for compliance varying from beginning 2016 to beginning 2017. These have a significant impact on the components and proportions of the investment portfolios which currently do not adhere to the asset class limits and counterparty sublimits. This effect will be more pronounced for portfolios consisting largely of real estate. Guidelines for calculating technical provisions are set out in the FR and quarterly and annual reports will be submitted detailing these computations beginning 2016. In addition, the IA will be monitoring solvency. A more rigorous regulatory framework is potentially what the sector needs to boost its declining performance.

For the entire Annual Report on the UAE Insurance Sector for 2014, go to http://www.ia.gov.ae/EN/PublicData/Pages/Statistics-for-2014.aspx

This site uses functional cookies and external scripts to improve your experience.

NOTE: These settings will only apply to the browser and device you are currently using.

As does every other site on the planet, we use information from our visitors to improve our site, our products, and your experience.